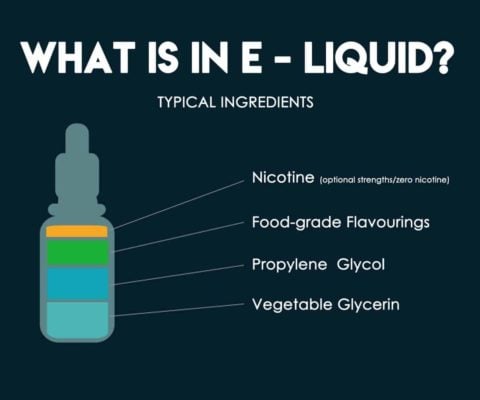 Everything you need to know about E-Liquid !!!!

Ok lets get started firstly E-Liquid goes under many names, Vape Juice, Vape Liquid, E Liquid Eliquid and I am sure that there are more out there, but they all mean the same thing. So E-Liquid is quite simply put is the Liquid / Juice that you add to the tank in your electronic cigarette ( e-cig) yes the device you use to vape also goes in many names. Now let’s take a look at the makeup of E-Liquids most vape juice available on the market today consists of 4 ingredients.

What is Propylene Glycol (PG)?

Propylene Glycol ( commonly referred to as PG ) is used in hundreds of food products and and is also used in food colouring and as an additive in lots of medication. Of course as you now know it is one of the base ingredients for E-Liquid. It is also worth mentioning that PG (Propylene Glycol) is non toxic. PG is used in vape juice as it has a much thinner consistency than VG (Vegetable Glycerin) and is an excellent flavour carrier. PG is responsible for carrying the flavour and giving you the throat hit in e liquids.

What is Vegetable Glycerin (VG)?

VG (Vegetable Glycerine) Like PG VG is an organic compound that is non toxic and is also used as an additive for food and many other products. VG is quite a sweet tasting liquid and is much thicker consistency than PG. Again similar to PG a 100% VG e-liquid would not be that great to vape there would be very little throat hit and no real flavour to speak of. VG is really responsible for delivering the vapour that come from your e-cig.

So we now know that Propylene Glycol carries the flavour and gives us a satisfying throat hit and Vegetable Glycerin gives us the vapour. I can hear you thinking well why not combine them both together to make an awesome vape juice. Well I am happy to tell you that the manufactures of E-Liquid have already thought of that and that’s exactly what they do. This is know as the PG / VG Ration and is found on all bottles of vape juice typically the PG comes first followed by the VG but be aware that this is not always the case.

Although any combination of PG/VG is possible (and available) There are 3 very popular ones readily available to chose from. And these are 70PG/30VG this is the most common and the one mainly used by Hangsen (although Hangsen do do a limited 50/50 range), this gives great flavour a satisfying throat hit and a reasonable amount of vapour.

The second most common one you will come across is the 50PG/50VG as the mix suggests it’s 50% Propylene Glycol and 50% Vegetable Glycerin and this type of e-liquid really is the best of both worlds with good flavour and throat hit combined with a good vapour cloud.

And finally third on the list is the 30PG/70VG mix which I am sure you have worked out by now produces less flavour a low throat hit but massive amounts of vapour. This last combination is not normally used by you or me but is used a lot by the sub ohm vaping community. If you are not sure what sub ohm vaping is (sometimes referred to as cloud chasing) don’t worry about it I will write about it in another article and you should just tick to the first two combos 70/30 or 50/50.

Really this is just as it sounds food quality flavouring is added to the PG/VG mix to produce the flavoured vape that you want. We use flavouring in many other consumable products on a daily basis for example cakes, ice cream, yoghurts etc… the list is endless. Of course flavours can also be combined to produce other flavours the combination can be simple like lemon and lime Hangsen did this to produce their lemon and Lime Flavoured E Liquid  and Vapemate did this in their Cherry Menthol vape juice.

As well as simple parings of flavours there are also much more complex pairings that are used buy both Hangsen and Vapemate in lots of their e-liquids for example some of the tobacco flavours like RY4 and Golden Virginia use very complex mixtures of flavourings to produce the finished product. In fact most e liquid manufacturers employ the service of a mixologist to formulate new and exciting vape juice flavours.

The table below shows the various nicotine strengths available as standard today although other strengths are available these are just the most common ones.

Kicking the nicotine habit is the hardest part of quitting smoking so here is a plan to try and help you kick it. lets say you are in the top band and smoke more than 20 a day then you will need to start on 18mg use the guide below to pick the best tobacco flavour for you.

Once you start vaping say Hangsen Golden Virginia e-liquid 18mg do this for a few months then try to reduce the nicotine content of your vape down to 12mg followed by a few months later down to 6mg of nicotine and so on eventually arriving at 0mg.

Iff dropping down from 18mg to 12mg is too big of a gap for you then you can mix the strengths. Mixing the strengths means you can have a greater choice of strengths here are a couple of examples lets say that you go to smoke was Benson and Hedges (B&H) then you would be vaping Hangsen Gold and Silver, dropping from 18mg to 12mg is to big a jump for you so if you get a bottle of each (18mg and 12mg) and mix them together you will ens up with a 15mg B&H mix. Pick any two strengths say a 3mg and a 12mg (add the numbers together (3+12=15) and divide by 2 so in this example a 3mg and a 12mg mixed together would result in 7.5 mg mix.

We hope you have found this guide to e-liquid useful but if you have any questions please let us know and we will be more than happy to help use are contact form to get in touch.